The U.S. Department of Veterans Affairs in Albany opened in 1951 and serves veterans in 22 counties of upstate New York, western Massachusetts and Vermont. Their goal was to reduce energy intensity at their medical campus which led them to explore the concept of combined heat and power. 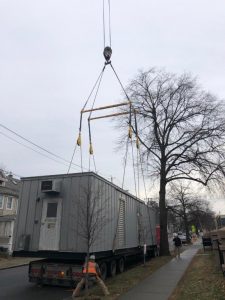 Martin Energy proposed one MEG 1005NMTU Martin Energy CHP package utilizing an MTU reciprocating engine, a 480v Synchronous Generator with RTD’s and exhaust heat recovery. The unit is an external stand alone package with “low noise” sound attenuated enclosure. The system was configured for island mode for utility independence when required. Martin Energy Engineers coordinated all of the controls for the new and existing stand-by generator system for seamless remote operation with full automation and remote monitoring. As part of the CHP package is an integrated heat recovery system that recycle’s the waste heat produced by the engine as a by product of the electrical generation and creates hot water which is used to heat the hospital.

Based on the efficiencies and savings, the MEG 1005NMTU generator was the appropriate choice. With the 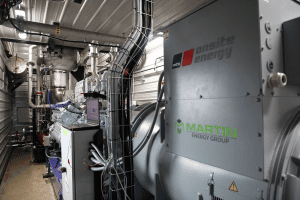 MEG1005NMTU, fuel emissions decreased by 38%. Albany VA is expected to have much higher quality power than previously with the utility supply alone. Utilizing the heat is also displacing natural gas previously used to heat the hospital. Nocomplaints or issues have been reported from nearby residential properties. The reduced thermal load by using the heat recovery system greatly enhanced the cost savings – which were better than our client expected. The financial project payback is expected to be within 4 years time. 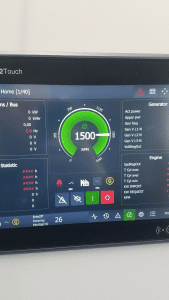 What is CHP Technology?

CHP technology converts gas into both electricity and heat in a single process at the point of use. The technology works by generating electricity on-site and recovering the majority of the heat created in the process. Its high efficiency contrasts with conventional power stations where heat is lost into the atmosphere through power station cooling towers, and further losses occur when transmitting the electricity along many miles of electrical distribution cables to customers. By using the CHP to generate electricity the greenhouse site can use the heat generated for its hot water/chilled water requirements, while creating substantial energy andcarbon savings.